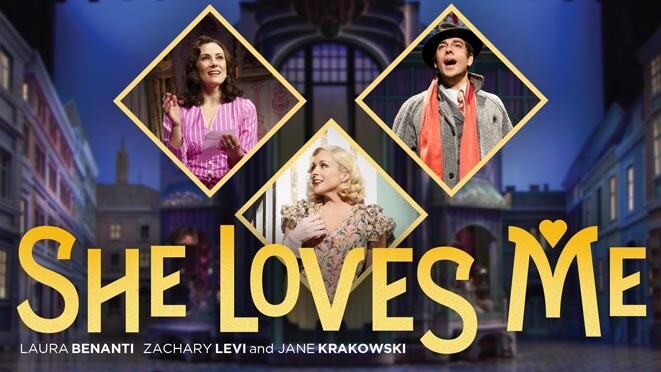 She Loves Me is a musical with a book by Joe Masteroff, lyrics by Sheldon Harnick, and music by Jerry Bock.

The musical is the third adaptation of the 1937 play Parfumerie by Hungarian playwright Miklós László, following the 1940 James Stewart-Margaret Sullavan film The Shop Around the Corner and the 1949 Judy Garland-Van Johnson musical version In the Good Old Summertime. It surfaced again in 1998 as the Tom Hanks-Meg Ryan feature You’ve Got Mail. The plot revolves around Budapest shop employees Georg Nowack and Amalia Balash who, despite being consistently at odds with each other at work, are unaware that each is the other’s secret pen pal met through lonely-hearts ads.

The musical premiered on Broadway in 1963, and subsequently had productions in the West End in 1964 and award-winning revivals on each side of the Atlantic in the 1990s, as well as regional productions. She Loves Me was revived again on Broadway in 2016, and the production became the first Broadway show ever to be live-streamed.