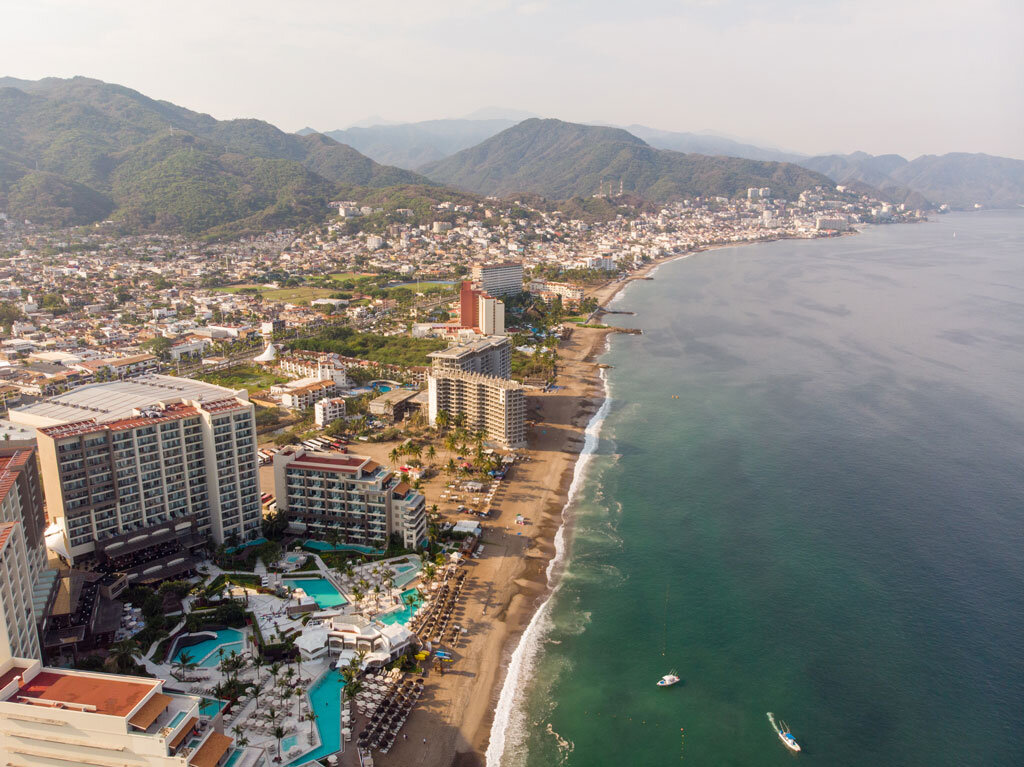 As the name suggests, Puerto Vallarta’s Hotel Zone is home too many of the city’s most frequently visited accommodations. The area is dominated by the establishments that give it its name, but it is also a great place to enjoy a longer term stay in Puerto Vallarta. Situated south of the Marina Vallarta neighborhood, the Hotel Zone delivers a centralized location as well as all the conveniences an incoming visitor can expect from a world-class traveler’s destination.

Heading south from the airport and points beyond along Boulevard Francisco Medina Ascensio will lead visitors to the city directly through the hotel zone. The area is home to several beaches which are prized for their expansive surfaces and soft, powdery sand, and although the hotels themselves are positioned all along the coast, all beaches in Puerto Vallarta are open to the public and there are many access points along the main highway.

Getting to Hotel Zone

The Hotel Zone almost exclusively covers the waterfront properties lining the coastal highway, and so this colonia is very convenient to reach using multiple modes of transportation. A taxi from the airport to the Hotel Zone typically costs less than 150 pesos, and city cabs transport visitors to the area from other points around Puerto Vallarta for even less. The majority of the city’s bus routes also lead passengers through the Hotel Zone, making it an especially visitor friendly neighborhood.

The Hotel Zone is optimized for tourists, and so the area is home to a full suite of shopping and dining options to rival practically any city in the country. Visitors to this coveted colonia will find a selection of bars, cafes and supermarkets along with a thriving local night life scene. Long-term guests may also find access to the nearby Wal-Mart and Sam’s Club convenient at various points during their time in the Puerto Vallarta area.

The Hotel Zone neighborhood is the site of several major retail establishments, including a multiplex movie theaters showing major Hollywood releases in both English and Spanish, the high end Galleria Vallarta, and the newly constructed Plaza Peninsula. Many international chains such as Starbucks, Chili’s and the Outback Steakhouse also have locations in the area, making it a great choice for tourists looking for a taste of home.

However, the neighborhood’s most valuable resource remains access to some of the city’s prime beaches, which are collectively referred to as Playa de Oro. The hotels themselves may call the beaches on which their buildings are constructed by a corporate name, but these are unofficial, and the commonly accepted names for the beaches that make up the Playa de Oro shoreline are Playa Los Tules, Playa Las Glorias and Playa Tranquila.

The Hotel Zone may not exemplify the most authentic form of Mexican culture, but is an inviting destination nevertheless. Its range of amenities and central location make it an excellent choice for incoming visitors who want both the entire city at arms’ reach and the familiar touches that make life in their home countries so convenient on an everyday basis.

Although the Hotel Zone is most well-known for its luxury accommodations and range of resorts, it is also an excellent environment to enjoy on a long term basis. Visitors who establish their bases near the Hotel Zone may be far from home, but they’ll always be close to what they love.

AJ Freeman is an adventurous spirit, serial friend maker, and general enthusiast. He lives his everyday life hoping to demonstrate the nearly infinite potential for discovery and wonder on this small wet rock orbiting a dim yellow star in the backwoods of the Milky Way.
PrevPreviousObtaining Healthcare in Mexico as an Expat – Part 2
NextWhat’s a Cognate and Other Fun Spanish Word GamesNext