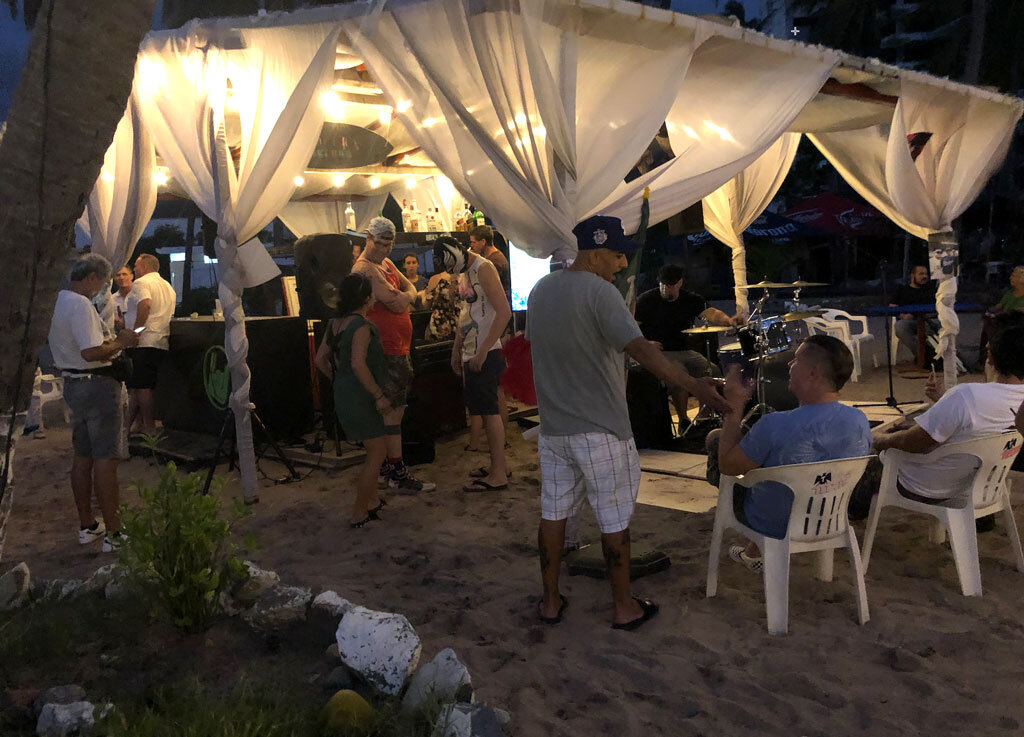 I pretty much always try to have a good time, but this weekend in particular carried a more profound impetus than the typical Thursday-Sunday hiatus, as it marked what would have been the 50th birthday of JT, a Vegas native, Los Angeles Dodgers fan, and thorough partaker of the human experience. Although he was gone far too soon, I think he would have been pleased with the weekend that unfolded in his memory among the people who cared for him.

It was the end of another work week and I was on my way to accomplish one last task, picking up a few physical copies of another local publication in which I’ve scattered a few hundred thousand words over the last couple of years for some street-level distribution.

For some reason, a brass band played me across Plaza de Armas and past the statue of another departed dignitary, the honorable Ignatio L.Vallarta, as I strolled into the tourism office at City Hall (Independencia 123, Centro), where they stack the things half a meter high.

When I was finished with my paper route, I stopped at Sonorita (Olas Altas, Pino Suárez 234) for a couple of quick 15 peso al-pastor tacos with a shot of mezcal (and a timed to-go order) before rounding the corner toward the weekly administration summit for We Love PV at Bar La Playa (Lázaro Cárdenas 179, Zona Romántica).

It was a productive meeting as always, especially since I was finally able to squeeze out some info about the timeline for our #WeLovePV tees…there’s definitely a guy and Darren and Charlotte are going to go speak with him this week about finally making the merch happen.

Remember guys, I get a special one: navy blue, rainbow logo, size XL, 1 of 1. You promised.

When the meeting was wrapped up, I scooped up my warm polluella from Sonorita before delivering the papers to Studio Palos @ Casa Alexandra, the subject of that week’s piece in the publication. While I was at the studio I got a chance to check up on the progress of the mosaic, which was quickly nearing completion in advance of the big unveiling next we–um, last…uh…October 16, 2019.

Friday afternoon I was engaged as always, leading the lunch crew at Vallarta CoWork (101 Morelos, Centro) to another afternoon of midday menus and “just one drink.”

This time we headed over to Pal’Mar Seafood (Ignacio L. Vallarta 268, Zona Romántica) for the final Friday of fantastic 2×1 burgers, and while we’ll be sad to see it drop from the regular route for the Flying Cafeteria, you can bet you’ll find me in there on the other days of the week, when the promotion is still active for the foreseeable future. Another casualty of high season.

Later, a few CoWorkers and community members headed over to Plaza Caracol to catch one of the first screenings of “Joker,” one of the many Hollywood films that is played locally in English with Spanish subtitles. I don’t know if you’ve seen the movie yet, but if you’re at all interested in the modern mythology that is the big screen comic book world–and even if you’re not really into superfolks saving the CGI world in brightly colored tights–I think you’ll enjoy it. Two rings up.

After the credits rolled, I made a quick stop at an apartment complex in Versalles for some post-flick discussion and a glass or two of sangria before a scheduled late night meeting at La Madalena (Av. Francisco Medina Ascencio 2025, Zona Hotelera), a swanky moonlight hang with comfortable couches and a great tequila selection.

Here, I availed myself of some shots with sangrita before calling it an evening with some Kwik-E-Mart snacks in hand…I knew Saturday and Sunday would certainly be full shifts.

Saturday afternoon was, as you know if you’ve been keeping up with our popular video interview series, Oktoberfest at Monzón Brewing Co (Venustiano Carranza 239, Zona Romántica).

You already know there was plenty of cold beer to be consumed in honor of this traditional German holiday which fully deserves to go global, but there was also a smorgasbord–wait no, that’s Swedish–um, a bunch of food including German staples such as meat, potatoes, meat, potatoes, and bread.

The details are kind of blurry even looking at my notebook right this sentence, but I definitely drained my commemorative 1-liter beer stein multiple times as well as winning a beer chugging competition by a comfortable margin to demonstrate my credentials as a lifestyle scout for all to see. Some chick also stole my lollipop with the glowing stick, but that’s another story.

I gotta be honest, my battery was not fully charged to start off this Sunday. I powered on Sunday morning to find myself in bed wearing all my clothes and still feeling the effects of a career partially based in binge drinking.

However, today wasn’t about me.

No indeed, this day was devoted to the memory of Jason Thomas Freels, a man who by all accounts made it his mission to enjoy every damn day of his life to the fullest…and so, on the 50th anniversary of his arrival to this planet, we would all fight through the German party flu and gather to celebrate his memory in the only appropriate fashion: a blowout beach party.

Night fell and the festivities took flight as I paid the 200 peso corkage fee at Flamingos Beach Club (Febronio Uribe LB, Zona Hotelera, Las Glorias) to get access to all the ice and mineral water I needed to take down the 750mL of tequila I picked up at the supermarket…hey, it’s economical if you look at the cost per drink. I minored in beer math at college.

It was one hell of a night, with fun stories being swapped freely by loved ones, live music, a taco bar to offer a crutch to anyone planning on drinking most of a tequila bottle, and an impromptu sand wrestling tournament that no one won. The Dodgers even had the courtesy to notch their final win of the year on the night…it was an event worthy of fireworks, which also happened.

JT would have loved it.

AJ Freeman is an adventurous spirit, serial friend maker, and general enthusiast. He lives his everyday life hoping to demonstrate the nearly infinite potential for discovery and wonder on this small wet rock orbiting a dim yellow star in the backwoods of the Milky Way.
PrevPreviousTroppy, Kami, Craig and AJ of ThumbTack Theater Pull Back The Curtain On An Inspired New Vision Of Theater In PV
NextDIF – An Easy Way To Get InvolvedNext