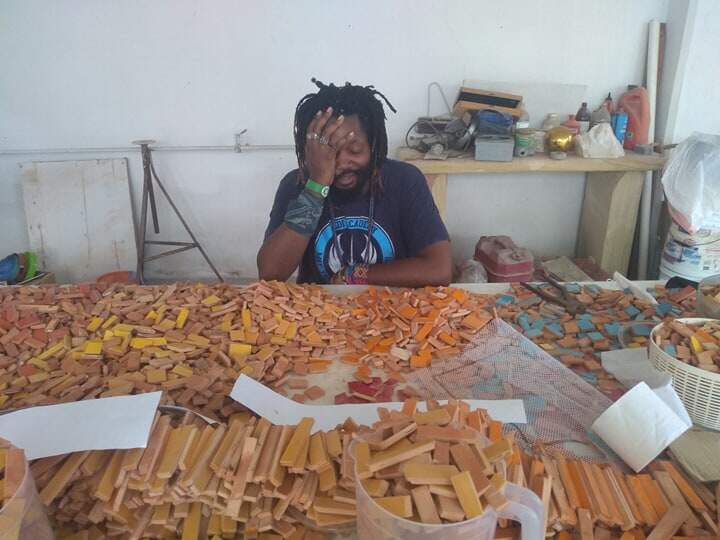 While I generally strive to maintain a highly favorable work-life balance, occasionally being a part of something truly spectacular can merit shifting into overtime. This was the position I found myself in during these days, when I was deputized as part of the creative force that would be installing a massively kaleidoscopic wall of tiles atop Studio Palos at Casa Alexandra (Calle Brasil 1039, 5 de Deciembre), the first stop on this year’s ArtWalk!

Of course, the long-lasting labor of love meant that I would have to sacrifice a lot of the evening excursions that typically drive the storyline here, so I hope you’ll forgive a slightly less eventful edition this time around. I’ll try to make the tedium worthwhile.

Not many people would have reported for duty on this day, as one of the recent hurricanes that have brought deluge and devastation to our sunny shores of late manifested itself in full force just in time for the team of assistant Nicky and I to make our mark on the project.

Nevertheless a tight timeframe before the debut meant that there was caulk to be laid, rain or shine, and that meant that shirking my service to the art was not an option.

And so, under the coordination of Nancy Page, an experienced local mosaic artist, we set upon the laborious process of turning that pile of tiles into a 10-meter wide portrait of…well, I can’t tell you that until the debut event on the 16th. Sorry…magician’s code, you understand.

Anyway the storm had what you might call a slightly disruptive effect on the process, and much of my time on the site that afternoon was spent physically holding down the fort as bellowing gusts of wind threatened to send our collapsible gazebo sailing out to sea like an errant parasailer taking an unexpected flight to Nayarit.

Together the three of us rose to the challenge, making a sizable dent in filling the skeleton of the piece and rediscovering the music of The Cure along the way.

When the workday was wrapped up, we changed out of our most soaked pieces of clothing and soldiered through the rain to make it out to the debut of Todos Incluidos, a special exhibition at Oficina de Proyectos Culturales (Calle Juárez 598, Centro) where even extraordinarily limited visual artists such as myself could have their night in the bright lights of the OPC.

Gallery curator Pilar was kind enough to not only welcome us in with a warm embrace and a cold beverage, but politely waste several seconds of her time looking at my childish oil pastel rendering of the Solar System’s first five planets, including our beautiful blue home known for some reason as “Dirtball.”

Later, at the weekly We Love PV staff meeting at Bar La Playa (Lázaro Cárdenas 179, Zona Romántica), where I made some passionate and pointed tile-based remarks.

See, that’s a reference that only Darren and Charlotte would really get, but it’s a weird enough sentence for us all to appreciate so I’m leaving it in.

Friday I resumed my usual position as chief social coordinator at Vallarta CoWork (101 Morelos, Centro) as the crew and community sat in the shadow of Our Lady of Guadalupe for a leisurely lunch at La Tostaderia (Iturbide 236, Centro).

It’s not that the pork enchiladas with green chile sauce I settled on weren’t a strong choice–quite tasty indeed–but I do have to say it was outdone on the wow factor by the breezy outdoor eatery’s tostada, which arrived to the astute Nash and Charlie as an entire salad and your animal choice of the barnyard piled atop a flat crispy corn shell about the size of an association football.

No time to dwell on my fleeting failures as a lifestyle scout as the time came to don my artist’s beret once more for the tile project back at Casa Alexandra. A late start meant a long night of tilin’ and profilin’ for yours truly, but hey…there are folks why pay to be part of an experience like this, so I appreciated the opportunity.

I’ll try pretty much anything once, so I guess a 9am Saturday wakeup call is no different. Once again I made my way down from my home high on a hill in 5 de Deciembre to the studio on Calle Brazil, loaded up for a long day with plenty of frosty cans from the nearest Mexican Kwik-E-Mart (literally every 50 meters, 5 de Deciembre).

During my long afternoon on the roof of the studio, where the sudden storm had long since given way to the endless summer sun, I had a lot of time to sit and ponder as I polished approximately eleventillion small ceramic tiles one at a time.

I won’t bore you with every purple scribble I made in my little notebook in this space–those are all so I can bore others later–but sometimes a little solitude isn’t the worst thing.

After I had laid the last of that day’s tiles into place, I decided I needed to do something special with my Saturday night in order to keep morale high in the internal office, and StarWings (Av Fluvial Vallarta 223, Díaz Ordaz) over in Fluvial obliged my inclination to revel through the convenient timing of their 6th anniversary celebration. Live music and free drinks flowed freely through the open air of the establishment, and I also won a sweet neon green headband which brings out the highlights in my hair.

Sunday afternoon brought a welcome reprieve from the routine, as another collaborator had been invited to participate in the project and bless me with a shortened shift. I strolled off the site that afternoon with a few spare beers for the afternoon’s adventures, using the break for a visit to Playa Camarones to soak up some warmth and savor the fundamental pleasures of life.

There would be tomorrow to work…if God can rest on Sunday I won’t burden myself with guilt.

AJ Freeman is an adventurous spirit, serial friend maker, and general enthusiast. He lives his everyday life hoping to demonstrate the nearly infinite potential for discovery and wonder on this small wet rock orbiting a dim yellow star in the backwoods of the Milky Way.
PrevPreviousI Survived the Summer of 2019 in Puerto Vallarta!
NextIt’s All In How You Say ItNext