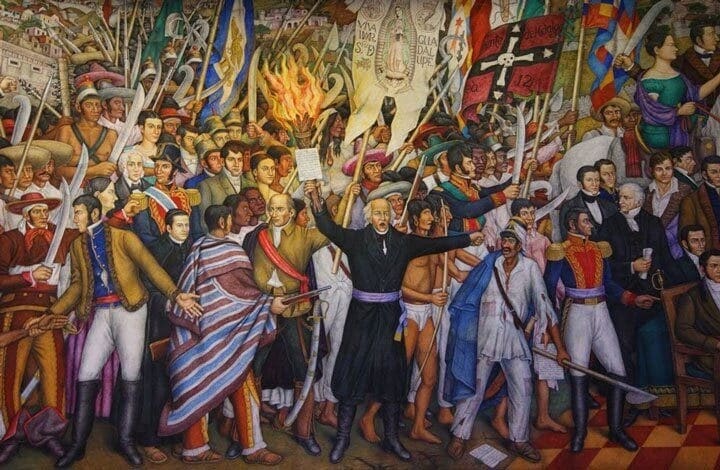 The name “Don” Miguel Gregorio Antonio Francisco Ignacio Hidalgo-Costilla y Gallaga Mandarte Villaseñor endures through Mexican history, and not just because it takes ages to pronounce. Miguel Hidalgo, as he was more expediently known, is commonly hailed as the “Father of a Nation” for his role in leading the Mexican Revolution that sparked a chain of events that eventually drove the Spanish off the American continent.

A man of his pious era, Hidalgo felt called to the Church, serving in a series of small parishes throughout southwest Mexico. Despite the restrictive nature of the organization, Hidalgo represented a number of departures from the tradition of Catholic clergy, with his education in the Enlightenment compelling him to question the absolute authority of monarchs (a divine birthright bestowed directly from above) and the inherent unfairness of contemporary society.

One of his noble aims aims was to take advantage of the uncommonly fertile soil in the town of Dolores, showing poor subsistence farmers how to grow abundant and nutritious crops such as olives and grapes. However, the colonial hubris of the Spanish Crown drove them to discourage cultivation of these crops or even prohibit them outright in what was then called “New Spain,” a policy designed to promote European imports at the direct expense of the rural poor.

In his role as spiritual leader, Hidalgo was noted as an inspired speaker, and it is his voice that thunders through the ages as the spectacular introduction of a new nation.

In open defiance of royal authority, the passionate priest boomed out a fateful address to a crowd of parishioners incensed by structural inequality: his famous “Grito de Dolores.”.

Hidalgo’s 1810 speech is credited with bringing Mexico’s independence movement from clandestine conversations to revolutionary reality, and to this day, the event is recreated by patriotic Mexicans in town squares across the nation each September 16th as part of Independence Day celebrations. This stirring ritual is traditionally led by the mayors of individual cities and towns, and nationally by the President of Mexico.

This man of the cloth, driven to belligerence by decades of oppression, punctuated his powerful words with military action. In the following weeks, Hidalgo amassed nearly 90,000 peasant farmers and everyday civilians for battle. Although only armed with basic weapons and lacking any significant formal training, Hidalgo’s revolutionary soldiers performed admirably against the well-equipped, professional fighting forces until the Battle of Calderón Bridge.

During this devastating defeat, Hidalgo’s valiant warriors—armed in some cases with common farming tools–ran into a wall of 6,000 elite Spanish troops. The result was tragic; the majority of the revolutionaries were killed on the battlefield that day or fled certain death through desertion.

Hidalgo himself managed to survive the slaughter in retreat, and charted a course north to the United States to seek possible intervention in the form of weapons, men, and other reinforcements. Along the way he was betrayed to the Spanish by double agent officer Ignacio Elizondo, after which he and other leaders of the rebellion were swiftly executed.

For his unwavering conviction to the fight for a brighter future, Miguel Hidalgois hailed as a historic liberator. Not only did conic Mexican artist Diego Rivera celebrated the revolutionary in a series of treasured public murals, but the town laying claim to his home parish was renamed Dolores Hidalgo in his honor. The State of Hidalgo, also dedicated to his memory, joined the United Mexican States in 1869. He is the namesake of Texas’ Hidalgo County as well.

The legacy of Miguel Hidalgo stands as testament that a lover of lasting peace must carry both an olive branch and a sword. His revolutionary spirit is honored here in Vallarta with a park in the city’s 5 de Deciembre neighborhood…and so, if you decide to meet up with the #WeLovePV community in Parque Hidalgo for our monthly Vallarta ArtWalk, perhaps pause to consider how one man could change the course of history.

AJ Freeman is an adventurous spirit, serial friend maker, and general enthusiast. He lives his everyday life hoping to demonstrate the nearly infinite potential for discovery and wonder on this small wet rock orbiting a dim yellow star in the backwoods of the Milky Way.
PrevPreviousThe Mexico Diaries’ Is One Man’s Story Of Life Made In Mexico
NextInterview With Delaney of Sol ShackNext