Shining The Spotlight On Monzón Brewing 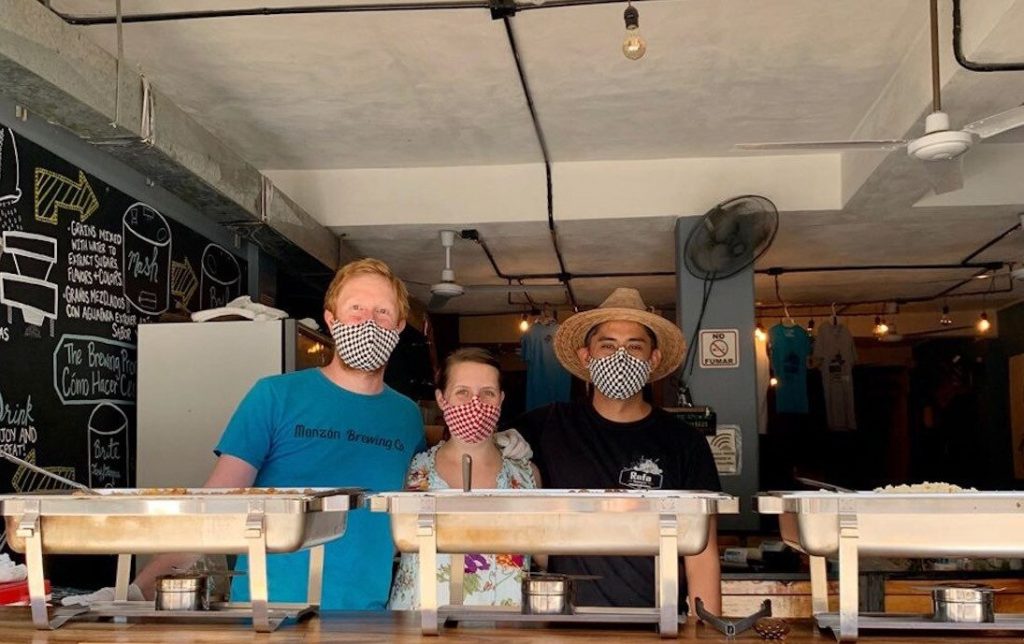 Want to know how good I was in my old duties as this website’s Lead Lifestyle Scout? I’ve basically been drinking at Monzón before it even existed. That’s right, I met Miranda and her permanent tag team partner Reid a few months before they opened the brewery down on Venustiano Carranza.

The afternoon we crossed paths, the Vallarta newcomers were showcasing one of the beers they planned to debut at the soon to open taproom…the chocolate-caramel stout they generously poured into the happy faces of appreciative locals at a local beer garden was the best possible advertisement, and I’ve been raising glasses at Monzón ever since.

Once even won a prize for doing it better than anyone else, but that’s another story.

Anyway, my role with WeLovePV has changed with the times–same title, different duties–and it was in that capacity that I ducked under the takeout counter facing the sidewalk and found a seat at a long table near Miranda last week, hoping to learn more about their community kitchen program.

Through Monzón’s program, individuals and families struggling with food insecurity can visit the brewery each Sunday morning to get a hot, delicious meal, no questions asked…a vital service in a truly unprecedented time. ¨My goal is to get up to serving 200 people every Sunday.¨Miranda explained. ¨The need is so obvious so we absolutely had to do something. Our customers have been amazing as far as donations, most of our funding so far has come from people who visited us last season.¨

In the background, Reid was in his happy place, atop some massive steel vessel wizarding up the timeless social lubricant, that magic tonic that first brought our ancestors together in collaboration. He looked up long enough for a smile at his wife and a wave at the table, then went back to performing his entirely essential work. The couple had traveled together from Washington State to India and back to this side of the planet, with beer and love fueling their vision every mile of the journey.

Miranda’s love for PV became ever more evident as she elaborated: ¨Doing this makes us feel good about contributing, it gives us a sense of purpose. Our customers help us help the community, and it shows what can happen when people have a common goal. We’re finding out that a lot of people from the area really want to help, they just aren’t sure where to start…seeing some of our regulars volunteer for prep work and staff support on Sundays was inspiring, we’re happy some great people drink here.¨

In addition to praising the community for its commitment to the cause, she was clear about the need for other local business owners to recognize the need for a network of similar programs as the crisis rolls on. ¨We really want to convince other restaurants to get involved, I’ve been making calls constantly. If even one bar or restaurant in each neighborhood does this every day, we can ensure that pretty much everyone at least gets something to eat on a regular basis.¨ she explained, her eyes flaring with fervor. ¨We’re willing to lend equipment, burners…we’ll even provide funding from our own donation drive if cost is the issue…we just want to get people fed, even–especially–if they’re not in Old Town.¨

¨Like a lot of places, we were struggling at times even before this…but that doesn’t matter. It’s time for all of us to step up for the city that has been so great to us.¨…certainly a sentiment worth spotlighting in 2020.

Donate to this Initiative through PayPal: [email protected]

AJ Freeman is an adventurous spirit, serial friend maker, and general enthusiast. He lives his everyday life hoping to demonstrate the nearly infinite potential for discovery and wonder on this small wet rock orbiting a dim yellow star in the backwoods of the Milky Way.
PrevPreviousShining The Spotlight On Noah’s Cafe Crew
NextAirlines Resuming Flights to Puerto VallartaNext