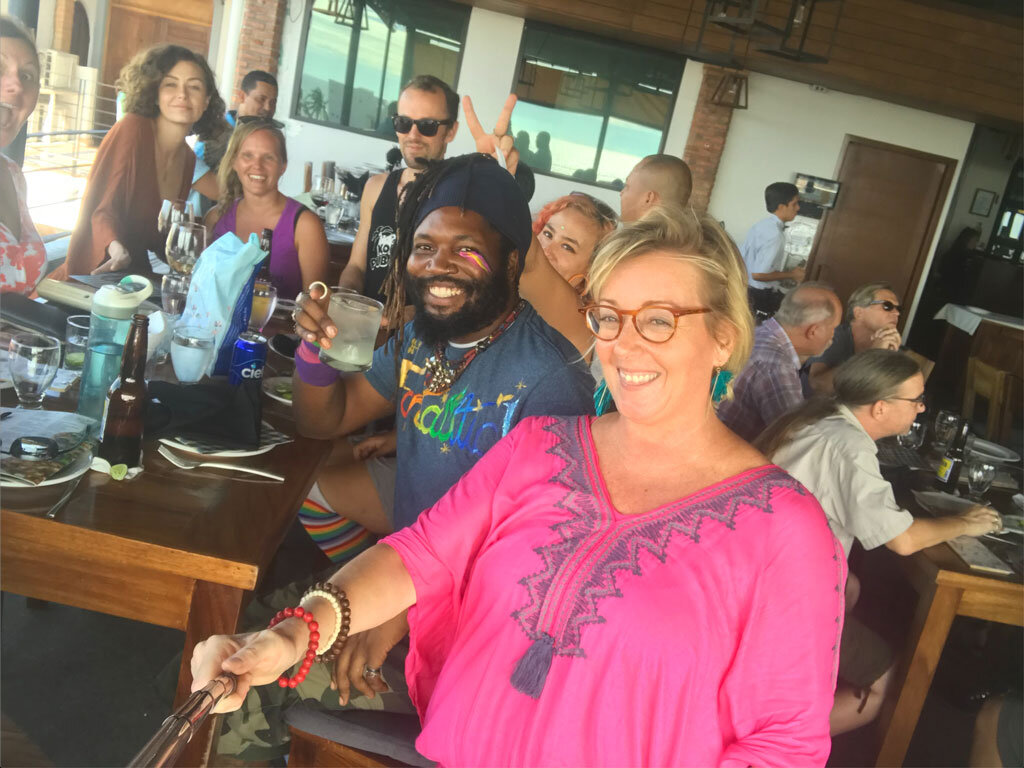 All this compelling content has to come from somewhere, and so my job as lead lifestyle scout continues to take me to some pretty fun places during the course of a weekend (which typically extends from Thursday to Sunday because of my stellar work-life balance).

After barely making deadline with a couple of posts for this fine digital publication–I’m consistently terrible with that, sorry guys–I celebrated the end of my work week with yet another trip to Real Deal California Burrito (Calle Honduras 257 A, 5 de Diciembre) for their apparently addictive shredded pork special.

I promise I don’t work there or anything, I just rarely deny my inner fat kid.

After lining my stomach with memories of the delicious burrito, I saddled up and headed south toward the weekly administrative summit with Charlotte and Darren at Bar La Playa (still at Lázaro Cárdenas 179, Zona Romántica). This week’s minutes were especially exciting, as it was announced that we would start offering excursions showcasing what our fair city has to offer, and that I would have a featured role in curating the experience.

Leading a group of strangers around babbling about tacos while they have to listen to everything I say sounds amazing, and I commend the team on their choice of me.

When the meeting was adjourned, my assistant Nicté and I made one of our frequent art supply runs, stocking up on paint from Mexico Magico as well as making a stop at the party favor store on Calle Libertad, a purveyor of fine 10 peso jewelry. It was to be a night of creativity and street tacos para llevar courtesy of La Hormiga (Lázaro Cárdenas 400), which is incidentally one of WeLovePV’s Top 10 picks in the category.

Decked out with a fresh coat of paint, I set out on the front end of Friday’s business, the weekly Vallarta CoWork (Morelos 101, Centro) Not-Working Lunch. The Flying Cafeteria came in for a landing at Restaurante Dianita (Calle Francisco I. Madero 243, Zona Romántica), promising comida corrida in the company of the city’s most colorful co-working crew.

I decided on the marlin dish, arriving to the table in a savory red sauce with beans and rice and accompanied by a bowl of noodle soup. 70 pesos later I had enjoyed a nice glass of agua pepino and fielded a most welcome compliment about my painted shirt and face.

Next up was the first meetup event for Facebook community group Vallarta- The Real Deal. The inaugural edition unfolded from the 6th story bar at La Traviata (Calle Honduras 309, 5 de Diciembre), combining happy hour specials and a panoramic view of both ends of the city from its perch just up the hill on Calle Honduras.

Gonna go ahead and pat myself on the back for bringing together a nice mix of locals from different walks of life since things can get kind of cliquey in a town like this if nobody stirs up the population for too long. I guess Jack kinda helped too, but you go, AJ.

When the drinks went back up to their normal price, a few members of the party headed over to 1000 Caguamas (Uruguay 162, 5 de Diciembre) for some aguachile and sunset scenery.

Naturally I had worked up quite a case of the munchies by this point in time, so I quelled the rebellion in my belly with a large order of habanero-marinated shrimp. The menu offered fair warning about the spice level of the dish, but a few years in Mexico (and growing up with cuisine from the Global South, which all seems to be fiery af for some reason) has greatly increased my tolerance for capcasin.

Or at least, so I thought. After a few bites, there was an inferno in my mouth that could only be quenched with lots and lots of beer. Well played, 1000 Caguamas…you keep on saving those turtles.

The evening rolled in from the mountains and it was time for the next stop…a debate ensued, and we decided to set a course for El Solar (Paraguay 1294, 5 de Diciembre) a few blocks away, it being another WeLovePV Top 10 pick and all.

Unfortunately the place was packed to the walls, so we settled for buckets of beer and 80s hits at Captain Don’s (Calle Honduras 126, 5 de Diciembre) instead.

Not the worst consolation prize.

In the wake of a long night of scouting, a day to dry out a bit seemed like a good idea, and so Darling Nicté and I planned out a nice relaxing day on the beach.

It was a pretty simple setup…just grabbed a bag full of 25 peso Argentinian empanadas from Che (Abasolo 189, Centro), stopped at the Kwik-E-Mart, and ambled on over to the less vendory end of Playa Los Muertos, just over the big rock. I’ve been here for about 4 laps around the Sun, and an afternoon kicking back on the shore with a few cheap brews honestly never gets old.

This gig isn’t all beers and bars, you know…there is actual research and legwork involved.

Since I just recently settled out my living situation by taking up residence in the hills above 5 de Diciembre, and took this opportunity to further the active aspect of my Lead Lifestyle Scout position with WeLovePV with a walking tour of El Caloso, the colonia directly below my new balcony.

Along the way I managed to figure out which of the little stores sell alcohol on Sundays (because it is mostly bars and beers) as well as scouting out D’ Cortes (Calle: Vía Láctea #222 en Colonia, El Caloso), a new restaurant in the neighborhood which I’ve recently gotten wind of from those in the know.

AJ Freeman is an adventurous spirit, serial friend maker, and general enthusiast. He lives his everyday life hoping to demonstrate the nearly infinite potential for discovery and wonder on this small wet rock orbiting a dim yellow star in the backwoods of the Milky Way.
PrevPreviousSpotlight on Puerto Vallarta’s El Centro Neighborhood
NextMexican Independence Day, September 16Next