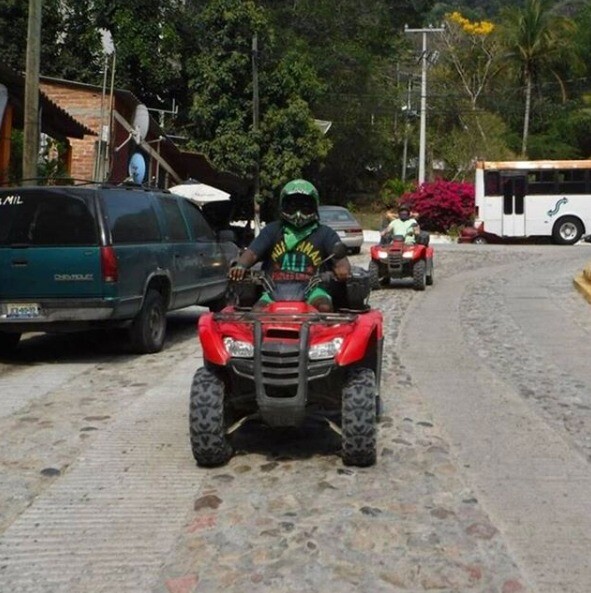 It was set to be a particularly active weekend hiatus for this Lifestyle Scout, studded as it was with several stops for productive purposes. It almost translated to actually working during my sacred sabbatical…at least, if you missed that loophole about doing what you love.

Thursday brought a bit of a shift in the weekly agenda, as my chief social coordinator position at Vallarta CoWork and full access to the office projector after hours empowered me to make my planned personal screening of the “Breaking Bad” epilogue “El Camino” into a community event.

You see, like with most of the others I hold, my job there is basically to be myself.

7:00pm rolled around and it was just about showtime…after a quick meeting with Team We Love PV over at Bar La Playa (Lázaro Cárdenas 179, Zona Romántica,), of course.

It was a quick but effective session, during which plans for a #WeLovePV mural came to light via Darren. Apparently there’s an artist attached to the project already, we just need a viable outdoor wall to color on…in a highly Instagram-friendly location, of course.

As for the on-screen exploits of “Breaking Bad’s” Jesse Pinkman, it was a worthy watch but as with many of these modern reboots, remakes, restarts, and rehashes, I could have done without it…I liked my own vision of his fate better to be honest, but we can discuss that later in some bar.

It was time to be myself professionally once more on Friday afternoon, with my regular CSC duties calling upon me to lead the CoWork community to the promised land, across both the Rio Cuale and River Jordan to Jerusalem Express (Venustiano Carranza 368, Zona Romántica,) for a taste of the Levant. The choice of the afternoon was the kebab, well-stuffed with meat and veggies for a satisfying midday meal.

Well worth the trip.

With apologies to our filmmaker/webmaster/founder, our international flight and the conversations our colorful crew had along the way made my a tad late for my next Friday afternoon appointment, shooting the interview with Raine, the owner of Real Deal California Burritos (Calle Honduras 257 A, 5 de Diciembre)

During our chat, I grilled the burrito boss on what makes Cali street food special as well as his chosen closing time of 6pm, which to this former Californian is frankly ridiculous. Everyone knows a west coast burrito is best enjoyed before or after a trip to the local watering hole.

I love the place, but I stand by what I said.

After taking a couple hours off duty to achieve my normal cruising altitude, it was time to beat the streets once more, as I was also scheduled to sit down with the Thumb Tack Theater troupe for a video interview about their upcoming series of shows.

Kami and Troppy of the ThumbTack Theater were kind enough to take a break from rehearsing for the debut “Toothpaste and Cigars” in the theatre above Nacho Daddy (Basilio Badillo 287, Zona Romántica) to share a little of what they’re bringing to the cultural scene in PV…the way I see it you can never get too much fresh perspective, and they bear more than their fair share.

I try never to lie on camera, and so as I promised in the interview above, I made my way to Monzón Brewing Co. (Venustiano Carranza 23, Zona Romántica) to unwind after a long day of doing whatever it is I do.

During my first 473mL pour of Lupita IPA, I got word about an upcoming series of events at the brewery called “Pints and Paints,” an activity that appears to combine two of my great loves (and three if you count alliteration). During my second serving, I decided that it was a good time to end my officially recorded activities for the day.

Saturday was an especially exciting day, as Dave, a buddy and writing client, had invited me weeks ago to take a ride up into the hills on one of his ATVs.

If you want to hear me wax poetic about the primal thrill of speed and the essential nature of childlike delight, I did that already, but I will share in this space that Nick’s Bar (Av. Vallejo #120, Col. Paso Ancho) on the hilly trail leading out of Paso Ancho has a paintball battlefield, one that I’m sure I will figure out a way to make use of professionally.

A long day on the rumbling roads of untamed Vallarta led to a long night of hops and barley monkeyshines, and Sunday morning came demanding a toll of birria tacos from Alex (Calle Matamoros 845, Cerro) to restore my full functionality.

With little scheduled on the last afternoon of the weekend, I decided it was a good time to check out the game-day menu in the Mosaic Room at Monzón while watching a little NFL action.

As the game kicked off with the infectiously enthusiastic strategic wizard Tony Romo on the call, I remembered that I had won free drinks by winning a drinking contest in last week’s edition, and celebrated my ability to drink by drinking them. Football fanatics filtered in as the game kicked into gear, and at some point during the game a commercial for Crown Royal whisky came on, imploring us all to take a water break.

I had to admire the responsible advice, considering the source…and remember, don’t drink and drive!

AJ Freeman is an adventurous spirit, serial friend maker, and general enthusiast. He lives his everyday life hoping to demonstrate the nearly infinite potential for discovery and wonder on this small wet rock orbiting a dim yellow star in the backwoods of the Milky Way.
PrevPreviousSpotlight on Puerto Vallarta’s Buenos Aires
NextHow My To Do List Changed Once I Got To MexicoNext