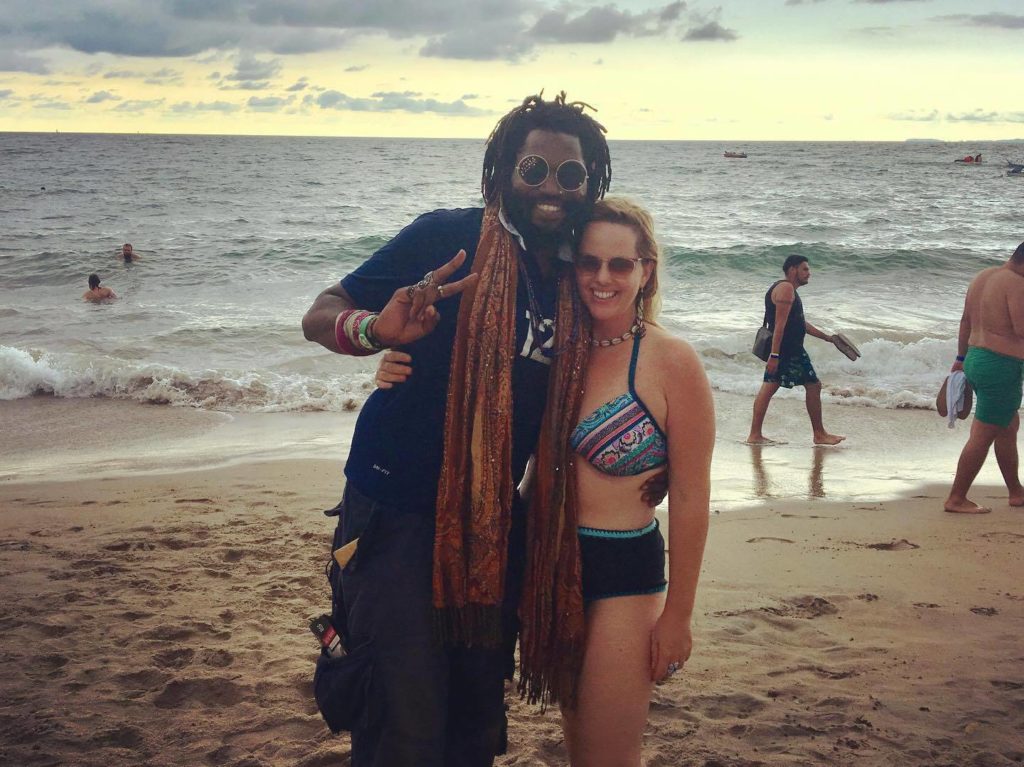 My job as lead lifestyle scout for WeLovePV takes me to some pretty interesting places during the course of a weekend (which, of course, extends from Thursday to Sunday because of my impeccable work-life balance).

The day started with an afternoon of lounging on a beach chair at Swell (Amapas 182, Zona Romántica)…gotta love the price of admission to a beachfront vista being a cold Corona.

Afterward, things got productive in the weekly WeLovePV administrative summit with Charlotte and Darren at Bar La Playa (Lázaro Cárdenas 179, Zona Romántica), where a few margaritas helped us navigate the tricky business of getting this site off to the best possible start.

Unfortunately, I had to leave the meeting early in order to attend the grand reopening of vintage clothing store Ropero de Jovany in their new location just off Calle Libertad. They’re right across the street from the party favor store now, which is bound to do my aesthetic a lot of favors in the future. Cristobal, who owns the store, also invited me to take part in the first Rehab Brunch (August 11) at the humbly named Casa Cristobal (Agua Zarca 573, Ojo de Agua). It’s going to be a great time and for reasons that will become obvious, I can see myself needing it.

After drinking what had to be an entire bottle of champagne at the store’s stylish soirée, I headed over to Hardavo’s (Lázaro Cárdenas 315-B, Zona Romántica) in the company of the multitalented Aqua, who makes everything look good over at the vintage store. There I met the ever-inspired Lady Zen and discussed a few future projects I’m lucky enough to be involved in.

At some point during the evening I had several balloons tied to one of my belt loops, so the staff over at Garbo (Púlpito 142, Zona Romántica), the evening’s final stop, can be excused for thinking it was my birthday. In any event, the free tequila was most appreciated, as were the talents of the evening’s featured performer who played a medley of hits on his magic keyboard.

After a long night on the job I was ready to hang out in bed for the day, but duty called once more. As part of my role as chief social coordinator at Vallarta CoWork (Local 3B, Morelos 101, Centro) I organize a weekly group lunch at a local restaurant every Friday at 1pm, and this week’s stop was Barra Light (Calle Rodolfo Gómez 134, Zona Romántica) for a fresh salad to help balance out my shaky typical dietary choices.

Later, after a few hours watching lucha libre in the comfort of home, I headed over to Tunnel Road BBQ (Río de La Plata 375, López Mateos) for the special of the week, a huge burger topped with a cheese-stuffed mushroom cap and bacon along with all the standard accoutrements. Served with a side of bacon mac as well as an order of jalapeños stuffed with pulled pork and 4 cheeses, it becomes pretty clear why I have to mix in a salad every so often.

Saturday held a full schedule indeed, with not one but two birthday parties on the day’s docket. The first was for Monzón Brewing (Venustiano Carranza 239, Zona Romántica), which celebrated the start of a successful third year with a party for regulars and randoms alike. Door prizes, scrumptious snacks, and of course, plenty of beer made for an enjoyable afternoon.

I wish I could have stayed longer, but there was a more important birthday on my personal calendar: that of trusted assistant Nicté at Rey de Oros (Calle Sierra Aconcagua 150, Olímpica). In typically weird and wonderful fashion, her party was the debut of a series of events spotlighting the creative community, consisting of poetry as well as performances from musicians and belly dancers for an audience of the most colorful individuals possible.

After closing the bar down, the festivities spilled over to The Hot Spot (Calle Allende 120, Centro) for high-energy dance music and all the adult beverages I could possibly hold. I honestly don’t remember much and won’t pretend I do, but I’m told I had fun.

That seemed like quite enough weekend revelry, didn’t it? That’s why I used Sunday to recover and prepare for the next week, with activities such as the Digital Nomads Jump Around event at Fly Trampoline Park (Av. Francisco Villa 1526, Macroplaza Local S-09 Los Sauces) on the agenda in the last few days. I tell ya, it’s hard work enjoying life this much…but I manage.

AJ Freeman is an adventurous spirit, serial friend maker, and general enthusiast. He lives his everyday life hoping to demonstrate the nearly infinite potential for discovery and wonder on this small wet rock orbiting a dim yellow star in the backwoods of the Milky Way.
PrevPreviousSpotlight on Puerto Vallarta’s Cinco de Diciembre Neighborhood
NextTop 10 Places To Get Pizza In Puerto Vallarta 2019Next