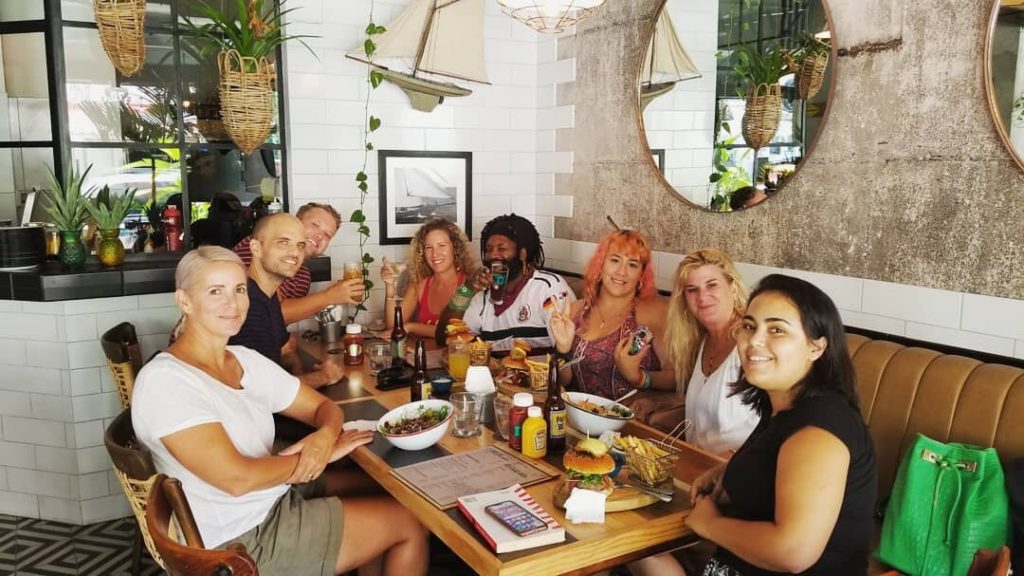 Got a bit of a late start Thursday afternoon and my standby burrito place continues to resist my petitions to stay open past 6pm.

Seriously, that would start riots back in California–so I decided to fuel up for the day’s We Love PV staff meeting with a seafood special at Tacon de Marlin (Honduras 145, 5 de Diciembre), uniting octopus, shrimp, and other residents of Bikini Bottom in the delicious confines of an extra large tortilla. It’s not hard to find seafood by the beach, but there’s just something about the way they cut the whole thing crosswise and finish it face down on the grill-top that really brings the flavor.

Once the hard part of my day was over, it was time to head on down to Bar La Playa (Lázaro Cárdenas 179A, Zona Romántica) to meet up with Charlotte and Darren for the week’s briefing. The hot topic this time around was the upcoming debut of “Taco Tuesday,” a street food scouting experience from We Love PV that will be captained by yours truly. None other than LeBron James tried to trademark the name out from under us recently, so it was a relief to hear we won that battle.

When the meeting’s minutes were at an end, it was time for something even more exciting: grocery shopping! True, it’s not normally a highlight of my day, but today was special…my ever-helpful assistant Nicté and I were set to gather up supplies in the finest such establishment in town, La Comer (Francisco Villa, Fluvial Vallarta) over in Diaz Ordaz.

Downplay the fun factor of a supermarket sweep all you want, I’ll be over here enjoying exclusive Yankee treats like Velveeta shells and cheese with bacon bits and Tabasco olives.

Friday morning I put on my chief social coordinator hat and “took my talents” to Vallarta Co-Work (Morelos 101, Centro) since LeBron couldn’t manage to trademark that phrase either. This week’s Not-Working Lunch came to Pal’Mar Seafood (Ignacio L. Vallarta 268, Zona Romántica), a place that markets itself on the bounty of the Banderas Bay but turns out a surprisingly strong burger which they are kind enough to offer on a 2 x 1 basis on weekday afternoons. Works well for us freelance folks.

This edition of the midday meetup turned out especially productive, as I got a chance to coordinate with Dez from PV Singles on a near-future wine and tango event at the co-working space…pretty excited about that for obvious reasons.

After lunch we set out on a group excursion to Gold Leaf Smoke Shop (Lázaro Cárdenas 379, Zona Romántica), but not for the reason you think. Okay, it’s a little for the reason you think, but it was also to see if we could catch store owner Samara in time to discuss collaboration on a film screening. Sadly she wasn’t there–if I owned a head shop I might actually live in it–but hey, there are other things to check out there so it wasn’t a total loss. I’m sure we’ll make it happen.

Later on it was all about Nicté as she was recognized for her passion in a special poetry presentation at Biblioteca Los Mangos (Av. Francisco Villa 1001, Las Gaviotas), and since I can’t afford to pay her more at this time the least I can do is show up for all her events and look my best while doing it. I decided a new bracelet would help me do that, so before the reading I swung by Calle Hidalgo to the apparently nameless Huichol-style jewelry store to pick up something cheap and colorful.

It’s been a relatively light rainy season, but when the skies do open up they do so with gusto…Saturday was a near-total washout, so I used my apartment as an umbrella while my assistant sizzled up some stir-fry.

Also started rereading this fascinating geopolitical perspective by the name of “Prisoners of Geography” that discussed the realities and future viability of borders as a concept…hey, a little brain food is all that separates me from being a glorified mascot, I totally get that.

I woke up Sunday to an interesting little surprise…while weighing the pros and cons of heading to one bar or another to check out the opening week of NFL games, I happened to turn on the broadcast TV (who does that, right?) to discover that for some reason, one of the four channels that get reception in the city plays a medley of game action in a similar style to the RedZone channel you either are aware of or does not matter to you.

Anyway, I started to get absorbed into the gridiron game and its extremely enthusiastic Spanish-language commentary when Miguel, visiting my neighbor David, must have heard my hooting and hollering and taken it as his cue to invite me to move my noise downstairs with them.

I did just that, and when the beer ran out we sent out for pizza then bribed the delivery guy to go get us some more when he arrived because that’s apparently something you can do here…I suppose part of my job is to know that, and the other part is to let you know.

AJ Freeman is an adventurous spirit, serial friend maker, and general enthusiast. He lives his everyday life hoping to demonstrate the nearly infinite potential for discovery and wonder on this small wet rock orbiting a dim yellow star in the backwoods of the Milky Way.
PrevPreviousDigital Nomads Living in Puerto Vallarta
NextSpotlight on Punta Mita MexicoNext