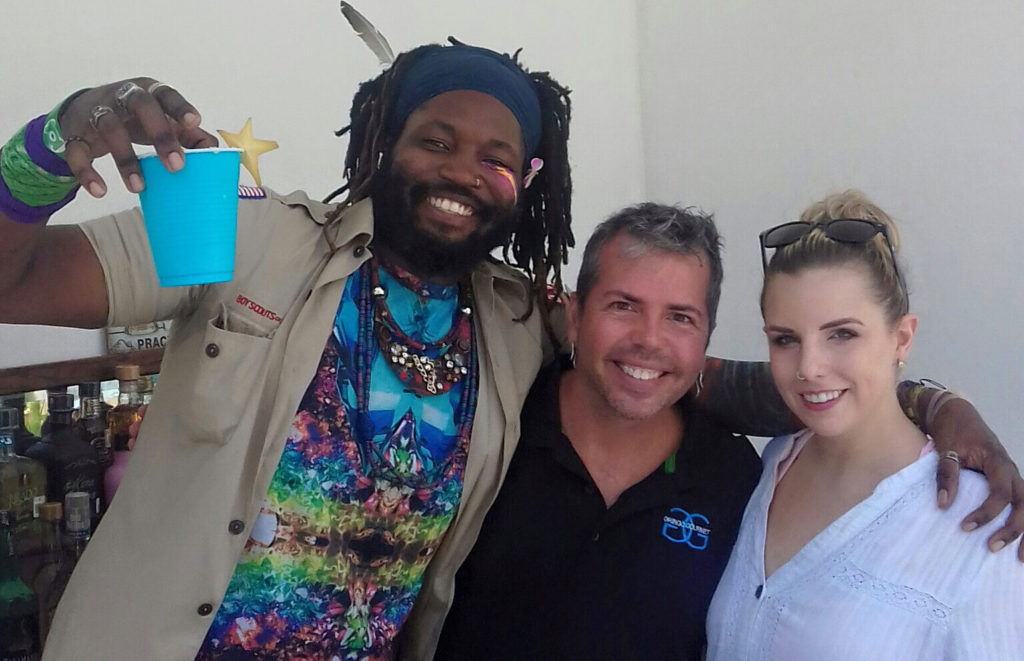 The WeLovePV wave shows few signs of slowing, and so my job as lead lifestyle scout continues to take me to some pretty fun places during the course of a weekend (which, as we know, extends from Thursday to Sunday because of my exemplary work-life balance).

Knowing the next day was set up to challenge even my professional-level tolerance, I elected to take the first day of my weekend relatively slow with a delicious midday meal of enchiladas over at Figueroa’s (Venustiano Carranza 302, Zona Romántica) before attending the regularly scheduled WeLovePV weekly briefing at Bar La Playa (Lázaro Cárdenas 179, Zona Romántica and don’t you forget it) with compatriots Charlotte and Darren.

During this key summit, the line of sweet merch for this fine website was officially announced and I was promised an exclusive t-shirt that nobody else can have and that I will happily wear all the time.

The weekly lunch session with the crew and community at Vallarta CoWork (Morelos 101, Centro) kicked the weekend off in emphatic fashion as the “Flying Cafeteria” came in for a landing at Monzón Brewing (Venustiano Carranza 239, Zona Romántica). My tuna chicharron tacos came in the company of an especially lively group this time around…a bit of high-ABV craft beer may have had something to do with that.

After a little creative writing–pretty much the only thing separating this ostensible artist from a normal drunk–I swung by Sean’s for a few space cookies, shared the stash with some fellow aviators, then headed back over to BLP to convene with a few friends who were also planning to attend that evening’s stand-up comedy show starring talented bilingual comedian Martin Léon.

And we’re back! Namely, at Ella Bar (Lazaro Cardenas #315B) for the stand-up set. Party member Brett had jokes as well, commenting on the amount of sand that showed up with me at the venue, commenting that it looked like I had just rolled off the beach.  Of course, that is exactly what happened, so joke’s on him, ha.

Moving on, I definitely expected to be entertained by Martin’s comedy stylings after sitting down with him earlier in the week and I’m happy to report the show delivered. Adding to the fun factor was his focus on ribbing my buddy Dave for most of the hour, mostly for being straight.

I was lucky enough to congratulate Martin on a strong performance in person before eventually departing for El Soñador (Ignacio L. Vallarta 229, Zona Romántica) for more sauced-up shenanigans. As places to find a good time go, “The Dreamer” is definitely a consistent choice.

Not that I remembered too much after midnight upon waking up in my bed Saturday after seemingly being teleported home. As you might imagine, I suffered some enduring effects from the previous evening’s revelry, and decided this was as good a day as any to focus on domestic activities, which is a really productive way to describe a hangover, wouldn’t you say?

In any event, my Saturday bout with party flu was a perfect premise on which to attend Sunday’s Rehab Brunch at Casa de Cristobal (Agua Zarca 573, Ojo de Agua).

The week’s Cajun low country menu included indulgences such as chicken and waffle bites with cheesy grits, muffaletta sandwiches, and a pork loin with praline sauce that has a special place in the memory of my palate. Offering a pool–complete with a waterfall along with a complement of inflatable pool toys–and courtyard alongside all the Bloody Marys and Salty Dogs one could possibly need, I expect this event to be the scene of several subsequent Sundays.

AJ Freeman is an adventurous spirit, serial friend maker, and general enthusiast. He lives his everyday life hoping to demonstrate the nearly infinite potential for discovery and wonder on this small wet rock orbiting a dim yellow star in the backwoods of the Milky Way.
PrevPreviousSpotlight on Puerto Vallarta’s Marina
NextEating In PV On $15 A DayNext