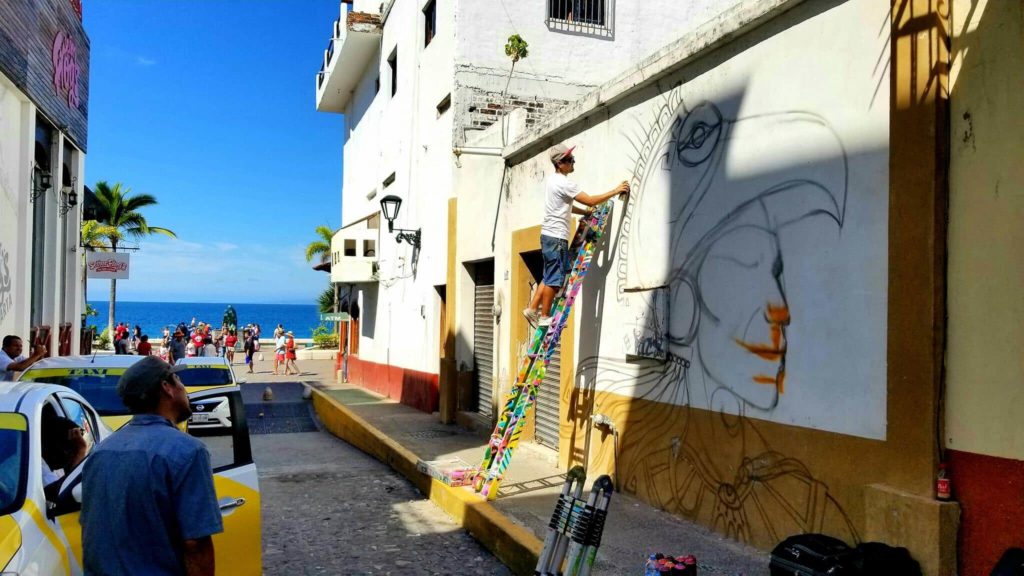 The tricky thing about following a career path in being yourself is that there isn’t much in the way of established advice to point you in the right direction….and so, I treat pretty much every day like a résumé, and this is a little of what I do on a weekendly basis.

This weekend started where it so often does, with a Thursday evening pilgrimage down to Bar La Playa (Lázaro Cárdenas 179, Zona Romántica) for the weekly staff summit with the #WeLovePV team.

The minutes for the meeting were particularly colorful this time around, as Darren announced that the long awaited mural celebrating our intense affection for this sunny city by the sea was finally set to be installed in the coming days. Gotta love the primetime placement on Calle Aldama, just steps from the western edge of the continent…it’s even right across the street from Sol Shack, where we’ve run a couple of video interviews.

Somebody should go Photoshop the mural into footage of Yazmín and I chatting a few weeks ago, would be pretty sweet.

Friday’s Not-Working Lunch powered by Vallarta CoWork (101 Morelos, Centro) required me to display the quick thinking and breadth of knowledge so often demanded of a Chief Social Coordinator/Lifestyle Scout. Our first pick for the afternoon turned out to be a bit overcrowded for our needs–hard to have a 6-person lunch group at a single 4-chair table–so I called an audible and set an alternate course further north to Los Laureles (Calle Juárez 820)…true to my calculations, nobody complained about 12 peso tacos…turns out I’m really good at my job.

Later, after catching the sunset from the river deck with a few folks from the “Vallarta- The Real Deal” group at Heaven & Hell on the Rio Cuale, I headed over to StarWings (Av Fluvial Vallarta 223, Díaz Ordaz) for a meeting with a client…at least that’s what I call my buddy Dave for tax purposes. We batted around current events over full-liter tarros of beer, and when our podcast was over, the gruyere-and-garlic French Burger from Pancho Villa across the street was the ideal dietary supplement to ensure I processed all the alcohol I had consumed that day properly.

Saturday brought perfect weather to dry out over a day stretched out in the Sun.

Since I typically wear enough bracelets for a lifetime each day, I decided to skip the constant flow of vendors at Los Muertos Beach and head for somewhere a little more tranquil…didn’t have to travel far, a short ride on the formerly orange buses departing from outside the Oxxo on Calles Constitution and Basilio Badillo deposited me, my can cooler and my beach towel at Playa Amapas, first beach along the South Shore stretch that leads out of the city proper.

Starfished out on the sparkling sands of the Pacific Coast, I was in an ideal atmosphere for inspiration…a kaleidoscope of colors enveloped my eye from vibrantly patterned beach attire to the natural splendor contained within the embrace of jungle and ocean that is so characteristic of the Banderas Bay region. I killed a couple of sixers, periodically made purple scribbles in my notebook, and saw a whale breach for free…not a bad afternoon.

This Sunday, as any fan of American-style gridiron football knows, was the day of the league conference title games that would decide the two teams that would compete for February 2’s Super Bo–wait, can’t use that copyrighted phrase–um, Global Marketing Championships.

Now, I didn’t necessarily have a rooting stake in the day’s matchups (as a non-practicing follower of a particular Texas-based franchise owned by a oily billionaire who shall remain nameless, I haven’t had much to be directly invested in for at least half a decade), but as an aesthetic enthusiast, I do enjoy team colors, uniforms, and combinations thereof…I was really hoping to see either Green Bay or Tennessee make the big game, but as the Stones so memorably noted: ya can’t always get what ya want, eh?

So yeah, it was disappointing to see two red teams facing off in what just might be the highest-profile clash of colors in the sporting world…but hey, at least it ain’t the Patriots again, right?

Anyway, over the course of the afternoon’s action I was able to reacquaint myself with several local watering holes, including both Monzon (Venustiano Carranza 239, Zona Romántica) and El Soñador (Ignacio L. Vallarta 229, Zona Romántica).

A couple of establishments–much love to No Sé Nada ( and El Colibri–even took delivery of Inspired Illustrations for my upcoming “64 to Infinity” book, and the interested observer can view those at Morelos 582 and Calle Corona 79 respectively…it’s nice to add a little extra color to life, yeah?

AJ Freeman is an adventurous spirit, serial friend maker, and general enthusiast. He lives his everyday life hoping to demonstrate the nearly infinite potential for discovery and wonder on this small wet rock orbiting a dim yellow star in the backwoods of the Milky Way.
PrevPreviousHey, Who’s That Guy Basilio Vadillo
NextHey, Who’s That Guy Francisco I. MaderoNext 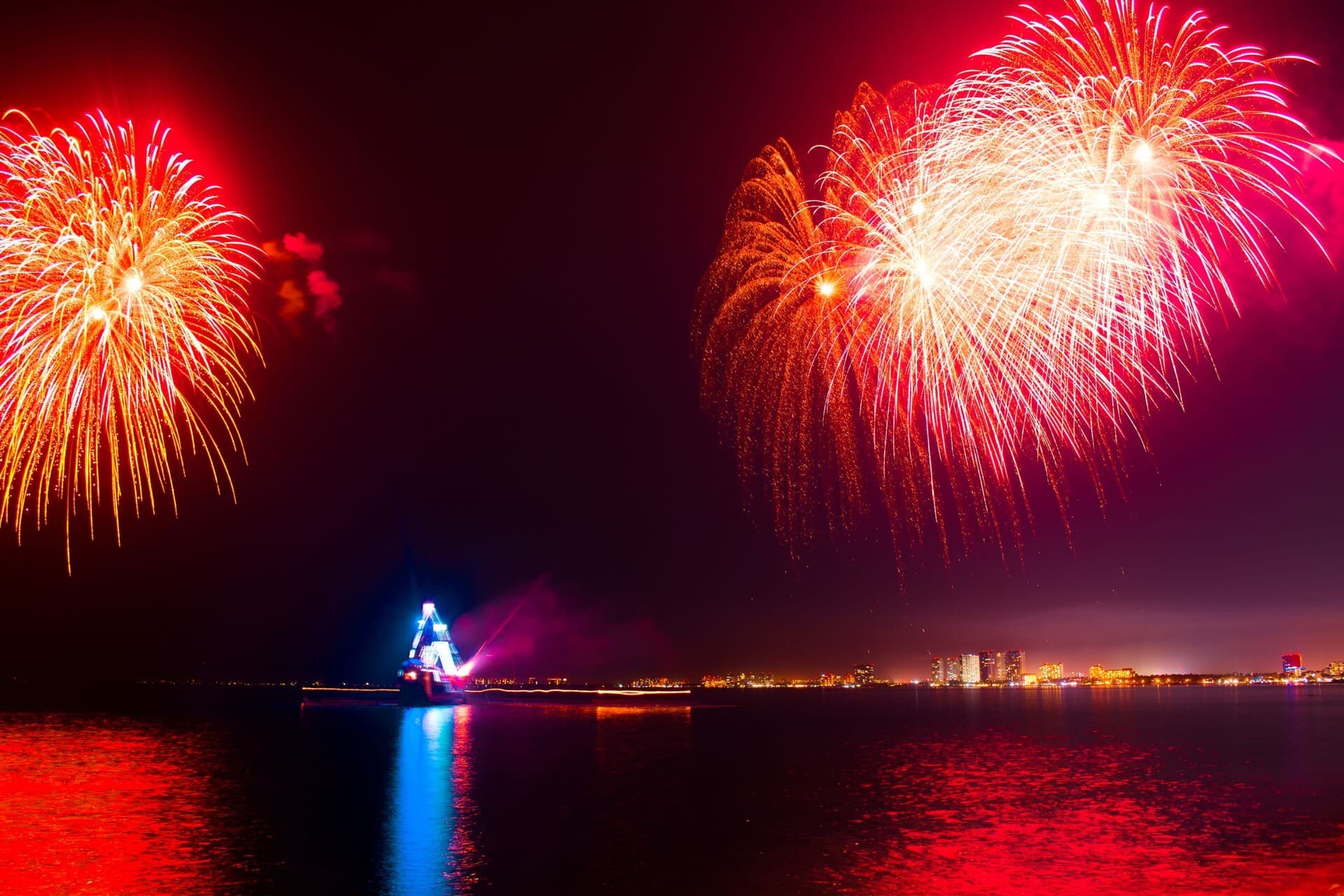